Combat: life and death in Vietnam 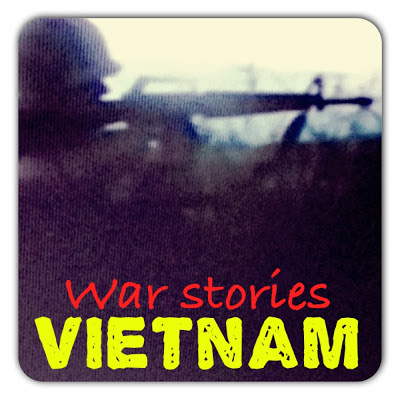 Staying in college was the choice of millions of young Americans hoping to avoid the draft and being sent to Vietnam. New Yorker Jerry Donnellan was one of those students. Would he refuse to serve? No. But if he could avoid it he would. For Jerry, every passing year at college saw more soldiers being sent to Vietnam. 'I ran out of college before they ran out of war' he recalls, as 1968 heralded the end of his education and the arrival of draft papers. 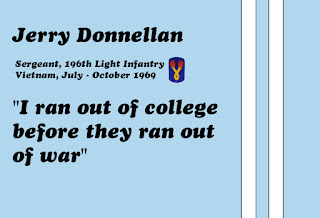 Basic training held one promise for Jerry. He would serve in the infantry. He knew what that meant. He knew it was 'not the best job.' The 196th Light Infantry awaited. 'D' Company. Oh, and if you've ever wondered what 'light' infantry is, think weight and think weapons. You only get to fight with what you can carry.

No tanks. No heavy machine guns. In Jerry's case, just a shotgun. His Job? Search and destroy. In less polite terms, find the enemy and kill them. Flown by helicopter into hot landing zones, the 'hot' didn't refer to the oppressive temperature and humidity of south east Asia. No,that description was reserved for the reception offered by the waiting Viet Cong or North Vietnamese Army. Descending into battle, only the drone of the rotor blades cutting though the air would offer any escape from the roar of incoming fire. Flashes from the tree line below and and the zip of bullets getting too close for comfort were the only measure of what lay ahead.


Download the audio directly at DivShare if you prefer, by following this link

Leaping into a landing zone from an eager to depart chopper or caught exposed out on patrol any sane individual might run away from gunfire. But you had to learn some things fast in Vietnam. Lesson number one was simple - run at the enemy. Being shot at is something you can see. It's something you can deal with. It's regular combat. Life. Death. Predictable. Kill or be killed. Stand still? Never. Run away? Definitely not. Because running away would make you a coward? No. Don't run away because that's where the booby traps will be. The booby traps that you can't see. Can't deal with. Can't fight. Placed carefully by an enemy that has been waiting for you. Predicting your movement. Predicting how you'll behave when they ambush you. Booby traps made from old radio batteries discarded by US soldiers. Helmets packed with glass, nails, high explosive. Inventive. Home made. Lethal.

Lesson two for staying alive was learn. Learn from the the soldier who had been in country the longest. Not from the officers. Not from the Sergeants. The closer a man was to ending his twelve month tour of duty, the greater the knowledge. In the first few weeks of service in Vietnam 'green' recruits -  in their crisp, unspoilt and still green uniform - would owe their lives to men who had the knowledge. 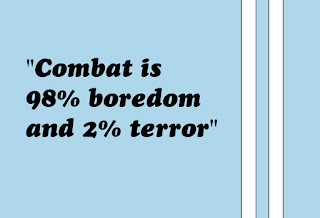 The last rule for staying alive in combat is that there are no rules that will keep you alive. No guarantees. Rules offer parameters, structure and an element of conformity. Vietnam offered no such comfort.

Patrolling for day after day, the enemy was often nowhere, and everywhere. Hiding in plain view in every village. Polite. Kind. But friend or foe? The pressure was immense. The violence unpredictable. Not condoning the massacre at My Lai, Jerry is honest enough to admit that he can see how troops could crack and how it could happen.

Combat, Jerry tells me, as if I could ever truly understand, is 98% boredom and 2% terror. It's that terror that shapes a man in combat. The 2% terror. When it arrived it was all consuming. ﻿﻿Purple Hearts are pinned on the chest of every veteran who has been wounded in combat. They are also offered as no consolation to the loved one's of those who die in service of the country.

In one day Jerry earned three Purple Hearts. You don't go looking for them he told me, rather you just happened to be in 'the wrong place at the wrong time.'

It was October 1969. Jerry was four months into his twelve month tour. He had learnt. He was surviving. He was running at the enemy. Not running away. Not standing still. But this was the notorious Central Highlands of South Vietnam. Unforgiving. Hill 370. Not a famous hill. Not a famous battle. Just a hill. Just another day and place for the 2% of terror

The day was October 24th 1969. A Friday. Back in the States the working week was coming to a close. Hair was getting longer. Protest was getting louder. The wail of Jimi Hendrix guitar could still be heard on the wind, as the legacy of Woodstock continued to demand peace. Tonight in Vietnam nobody would hear that demand. Talking to Jerry, he didn't have time to hope for peace, and it wouldn't have helped him to wish for it. 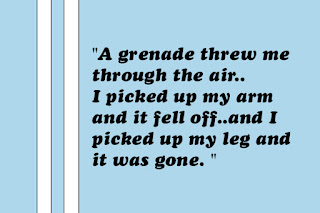 The 24th October started out quiet. Boring. Digging in. Improvising a game of baseball with shovel and a coconut. And then it happened. Out of nowhere Jerry was hit. Rocked back on his heels. He stood there. The impact arrived a lifetime before the crack that told him he'd been shot. The face of the sniper was nowhere to be seen. His face was wet. His hands too. The chunks he could feel all over his hands were...fruit cocktail. Not blood. Not muscle. Not bone and tissue. Fruit cocktail. Seven days into patrol Jerry was saving himself a treat. A treat to be the envy of his comrades. Safe in his breast pocket that tin of fruit cocktail was going to be the dinner of kings. The envy of all. Instead, it took a bullet, exploding all over Jerry. From certain death the resulting ricochet left Jerry needing no more than 3 stitches.Was he relieved? No. He was 'pissed'. Because as Jerry told me, its okay to shoot me, but not okay to shoot the dinner I've been carrying 'round for a week. He's laughing as he tells me this story. Laughing! Someone tried to kill him and here he is laughing. I can't help but marvel.

The 24th of October went from one sniper and a near miss to a night of heavy close combat.

This time no amount of experience would save Jerry. A grenade. An explosion. The loudest sound Jerry had ever heard. Thrown through the air. Landing on his back. Disorientated. Fighting was intense and all around. Get up. Move. Take cover. Fight. And then the realisation that carrying on was not an option. Trying to lift one arm it gave way and fell off. He needed to get up. Looking down his left leg was badly damaged. Raw. Like a raw hamburger he thought. His right leg was gone. It was to much for Jerry to take in. Defenceless and in the midst of a raging battle, survival would be an arbitrary matter. With no time to come to term with the situation Jerry hadn't even realised he had a head wound too. And head wounds bleed a lot. Blood poured over his face. Blinded by the torrent Jerry was plunged into solitude only to be gripped by fear as he felt someone pulling him up. If the enemy were hard to distinguish in the cold light of day, any chance of assessing what was going on now was gone. Any hope of protecting himself was lost.

Jerry got lucky. The Company medic got to him first. Strapping up his wounds morphine now pulsed though his body. Floating. Dying? Nothing was clear. The war for Jerry was over. 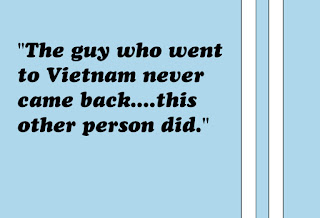 Would Jerry ever be the same? No. The guy who went to Vietnam never came back. 'This other person did.'

Back home in New York today, Jerry is the Director of the Rockland County Veterans Association. Helping young men and women get the benefits and assistance they deserve, Jerry is at least grateful that he can help others. Others who recognise he has walked in the same boots that they have.

Dealing with disability. Mental scars. Demons that lurk inside. In the forty years that have passed since the US pulled out of Vietnam following the Paris Peace Accords, Jerry has had to learn to cope with survivor guilt. Standing at the Vietnam Veterans Memorial Wall in Washington, the panels are arranged by date. Date of death. The names of the nineteen comrades who didn't come home are all there. As are the countless other friends, neighbours and fellow college graduates. The faces of 'D' Company in the 196th Light Infantry come alive. Young faces. 19 or 20 years old. Catching his own reflection on the polished black stone panels Jerry stops to ponder why he was given the chance to grow old. The 'chaotic world' of death and destruction that briefly became his home sometimes seems like a daydream. It offers no explanation. Leaving his Purple Heart at the wall to rest with his comrades, I sense that Jerry Donnellan won't ever find answers. 'I'm still trying to figure that one out' he says of Vietnam. He is not alone in that struggle. He never will be. Vietnam is long gone. War is not. More soldiers will fight. More will die. More will be left to ask questions. All will remain unanswered.

You can also find Brian Plumridge at -